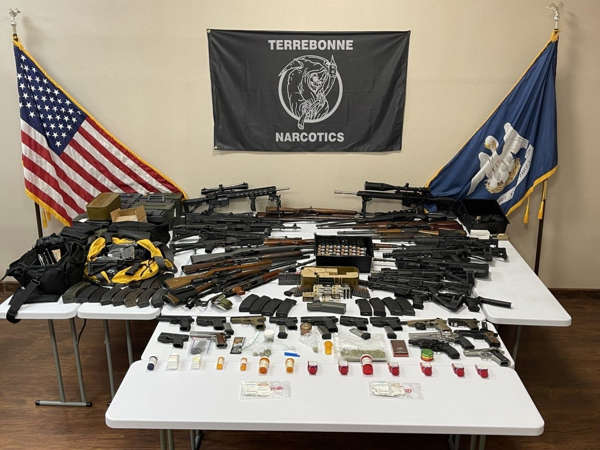 Nobody should be allowed to have that many small folding white tables.
M

Looks more like a gun bust with some drugs on the side.

I was thinking same thing. Bet some of it is 22lr as well.
R

Look at all those fully semi automatic guns that take high capacity clips.

Looking at that pic I had to chuckle. We’ve all seen the pics where they spread the guns out to take up as much real estate as possible and still squeeze into the frame. This pic where finding the drugs is like where’s Waldo… got the guns in a pile and those 4 pill bottles spread out like traffic cones… I got more than that in my medicine cabinet. Only thing missing is a stack of 20’s all fanned out in the middle.
K

I see at least three that are just lowers, but you know they're counting them in the total.

It's not that I condone drug dealing, and it's extremely likely that when they were dealing, they were carrying, but it bothers me the way that drugs are used to conflate the fear of guns. This investigation uncovered some legit drug dealing, and they found, in the home of one of the eight subjects arrested, a fair amount of guns, in fact, 45, the vast majority of the guns seized. By simple arithmetic, if 8 people were arrested and 45 of the 50 guns seized were in one suspect's home, at least 2 of these yahoos didn't even have a gun unless they were getting loaners from the one heavily armed guy. This wasn't a heavy crew of merciless killers blasting away on street corners, at least not by any report within this article. This was a circle of people who happened to engage in illicit narcotic activity, and ONE of them also happened to own a lot of guns, and several others had A gun or two. And the vague description of "illegally modified" weapons: Full auto? "Switched" Glocks? Cut down shotty? Or was a pistol upper on a rifle lower? (I think that's low hanging fruit, myself, I get that it's against the law by technical letter, but just...why even these days with "braces" being so widespread and acceptable?) BUT, for sure, let's parade the media past the tables full of guns and make sure we mention the ammo too because that number has several zeros on it. It's just so disingenuous, and disappointing, and only serves to cast aspersion towards anyone else who happens to own a fair amount of guns, as if that goes hand in hand with criminality.

I’m wondering how many of the arrested individuals were truly violent criminals. I just wish they would go after arresting and PROSECUTING violent criminals.
Fwiw, I’m sure that police do go after arresting violent criminals. But prosecutors seem to spend most of their resources prosecuting non-violent criminals.
I’m convinced that 90% of violent crimes are committed by a very few idiots. Back 20 years ago when my collection hit 50 guns, I could have very easily been arrested and had a spread like above and yet I always worked my ass off running my legitimate business. But yes, I also used drugs recreationally .
I’m so sick of the failed war on drugs. I wish we had a war on thefts and violent crime. You know…. The crimes where we have victims.
You must log in or register to reply here.
Share:
Facebook Twitter Reddit Pinterest Tumblr WhatsApp Email Share Link