Now this is a cool little section of the website! I could get comfortable with this (slides side to side in chair). It's been a long time fact that there is one topic that spans across political lines, morals, and ideals that joins nearly everybody as being each human's favorite topic....THEMSELVES. There was a government study done in 1985 by MUGA that showed how 74% of projects and agencies were developed for the underlying purpose of enabling a politician to claim some sort of legacy. Pride, it seems, is one of the few attributes that is non-racial, non-ethnic, and can cross economic barriers faster than you can say "brand names". Allowing a venue for those of us who often enjoy in the discussion of our favorite topic is ingenious, bold, and possibly a bit psychotic as well. I'll take it!


I had forgotten how big an M24 contoured barrel really is until he brought the rifle out of the back. Three hours of driving brought me from Harvey to Arnauldville yesterday to pick up my newly trued/rebarreled/bedded 700LTR hunting rifle. As my eyes glazed over the delicate engraving on the side saying "Bayou Teche Gun Arnauldville, La", I thought to myself, "This thing just graduated from the hunting stand to the competition line.". Mike Brazda started bragging about it's accuracy and produced a .240" three shot group that it fired with it's first three shots at 100yds, but my attention had already been diverted to the threading job and custom thread protector that adorned the muzzle. The eagerness to get my hands on a 5/8x24 threaded can to make sure that everything is straight has been on my mind since. The gun was a shooter before the work and my expectations coincided with my hopes that it would remain so once the Mike Rock SS barrel with 1 in 11.27 twist was cut to 22" and fitted. The H.S. Precision stock had to have the channel opened up to accept the bigger barrel and I noticed the inch or so of bedding beneath it in front of the recoil lug. I grimaced at the idea, but figured if the rifle is a 1/4moa gun with it then I wouldn't complain.

He then gave me the headspace tool that I requested to be made from the barrel drop off. Being the first one I've received after a custom job I have to say that it is perfect for what it will be used for. The dummy round I provided loaded with a 175gr SMK set at 2.800" OAL was already seated in the tool and he reassured me the chamber was cut to have the lands .01" off of that round. The kicker being that the test group I mentioned earlier was shot with 168gr FGMM ammo. Hopefully it's an indication that this barrel will shoot with anything. I may just bump back the match ammo I already have loaded up for the Palo Alto Mid-Range Spring Regional match this weekend and break in the new barrel "Ritten style".

Even placing in the bottom of the pack I was well pleased with the performance of the new rifle in the regional state mid-range match this past weekend. I didn't have time to work up any kind of loads for the rifle, so I just put together some rounds that would simulate a Black Hills 175gr Match ammo and shot that. With the changing winds on Saturday my scores sucked and I couldn't find a solid position with the H.S. Precision stock. It seemed that most of the line was kicking my butt with some HOT 155gr loads and heavier rounds (190-210gr) that were performing better in constant changes. Frustrated from a twisted knee and a stubborn dishwasher at home I decided Saturday night that I'd use the rest of the competition to try out some loads and see what came of it.

I had a few hundred 155gr Lapua Scenars sitting on the shelf left over from my .30-06 loading and decided it was time to try them again in the .308. I picked a safe load out the book, busted open a new box of Lapua brass, primed and loaded them up. I got my 100yd zero before the competition started and dialed in 16 minutes. Some confusion surrounding my first couple of shots resulted in a few misses, but by the time I settled on the x ring I had 13.75 minutes of elevation from my 100yd zero and the rounds were grouping VERY well. My wind calling showed, but by the last two relays of the day on Sunday I was back to shooting expert scores with some relatively slow moving 155's.

For those of you who wonder about breaking in a barrel properly, this one now has 140 rounds through it and have never been cleaned. I shot a 98 with the last 10 shots out of the barrel. 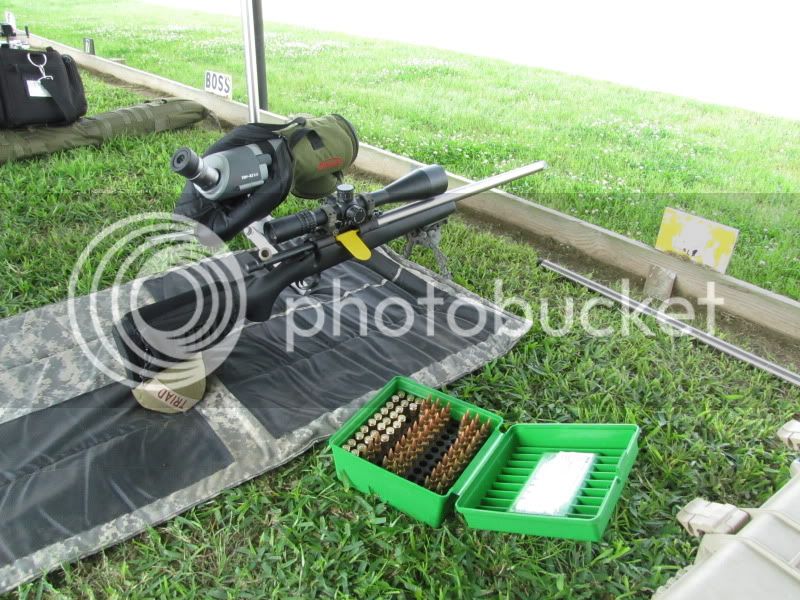